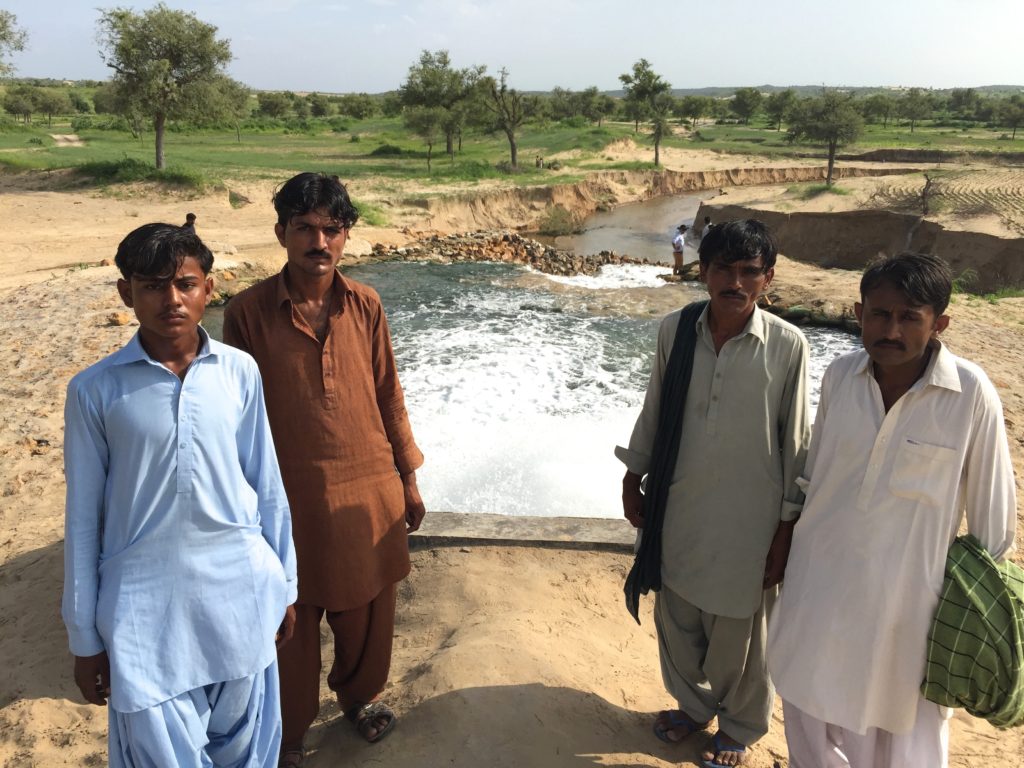 Amid the fields of guar and millet in the 2,700 acre trough near Gorano, in Islamkot taluka, there is a glimmering body of water. It is no mirage. But in water-starved Tharparkar, a near desert for most part of the year, locals never dreamed a day would come when water could pose a threat to their livelihoods. This saline wastewater can be traced back to the mouth of a nearby pipeline. Silently, but surely, it is encroaching upon the farmers’ plantations, without which many of them may very well starve to death. The 26-kilometre pipeline can be traced back to the Sindh Engro Coal Mining Company’s (SECMC) plant in Thar Coal Block II, near Islamkot.

The Sindh government has allocated 13 Blocks, covering an area of 9,000 square kilometres, for coal mining in Tharparkar. Of these, SECMC has been assigned to Block II, which has the capacity to produce 5,000 megawatts of electricity for 50 years. Block II contains only one per cent of the total Thar reserves, which amount to 175 billion tonnes of lignite coal.

As the sun descends behind the dunes and turns them orange, we drive past rows of trailers on Qaim Ali Shah Avenue, inside the SECMC plant. We pull into a gated compound and see some Chinese people jogging, their neon laces and smartphone screens glowing in the dusk. “We have 1,400 Chinese employees living on-site,” says Syed Murtaza Rizvi, Director of Operations at SECMC. Now that the airport at Islamkot has become functional, the plant will be more accessible. 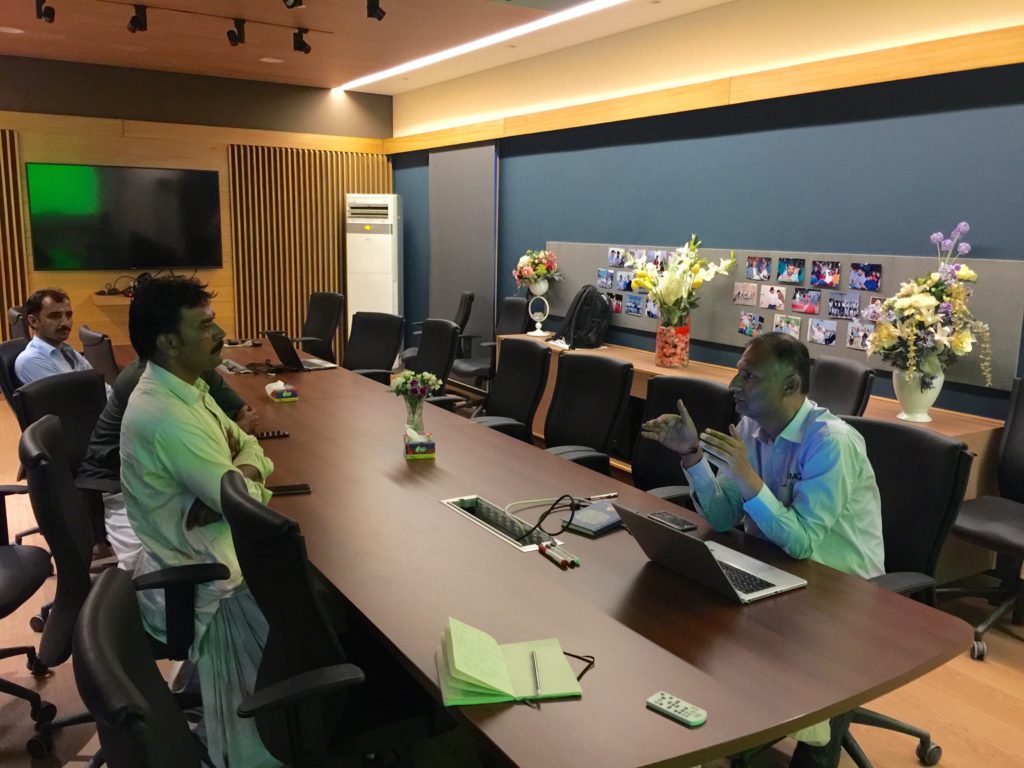 According to a mining feasibility study conducted by German power generation company RWE, in order to safely extract the 1.57 billion tonnes of coal reserves in Block II, SECMC must first reduce the quantity of groundwater that lies beneath this layer of coal. Since there is a vast amount of water under the ground, SECMC must pump out 35 million cubic metres of it per year, which it will continue to do for as long as mining activities are carried out in Block II. The water being pumped out is not toxic — it is merely brackish. Laboratory tests conducted by certification company, SGS Pakistan, show that although this water is saline, it is nowhere near as bad as seawater and can be used for drinking, agricultural purposes and fish-farming, if treated via the reverse osmosis plant the SECMC has set up near Gorano.

The entire water disposal scheme is the responsibility of the Sindh government. It first identified a natural depression south of Block II, near the village of Dukkar Chho. But since this would reach full capacity very quickly, the depression at Gorano was identified. Water is being dumped at both sites since April 2017. The organisation responsible for proposing Gorano as a disposal site is the Sindh Coal Authority (SCA) — a body that has been probed for financial corruption, illegal appointments, and, of late, been indicted by the NAB for enabling the illegal sale of coal.

The reason why these two depressions have been chosen for water disposal is that, collectively, they provide adequate storage capacity. Earlier, another depression known as Trisingri Dhand had been identified further south, in the Rann of Kutch. But this could not be used as it was declared a Wetland of International Importance in 1971 under the Ramsar Convention, of which Pakistan is a signatory.

Luckily for SECMC, there is no international convention protecting Gorano’s environment and so it will dump its wastewater there until the coal plant becomes operational in June 2019. Thereafter, the SECMC will stop disposing of the water and start using it for the cooling requirements of the plant. But by then it might be too late for the 3,000 residents of the 12 settlements in the Gorano area.

Villagers filed a petition in the Sindh High Court last year against the Gorano project and have been protesting outside the Islamkot Press Club since October 2016. But their voices are being silenced. Bheem Raj, a local activist and lecturer at the S.M. Government Arts and Commerce College Karachi, reveals that members of the protest movement have received phone-calls from agencies warning them against participating in ‘anti-state activities.’ “It’s CPEC,” they say. “You cannot be anti-development,” they say. They want to sit down and talk it over. Arshad Kumbhar, son of Muqeem Kumbhar, a renowned civil society activist of Tharparkar, says Sindhi columnists such as Naseer Memon, who have written on Gorano, get bought out. SECMC offers them lucrative jobs to stop them from railing against the project. 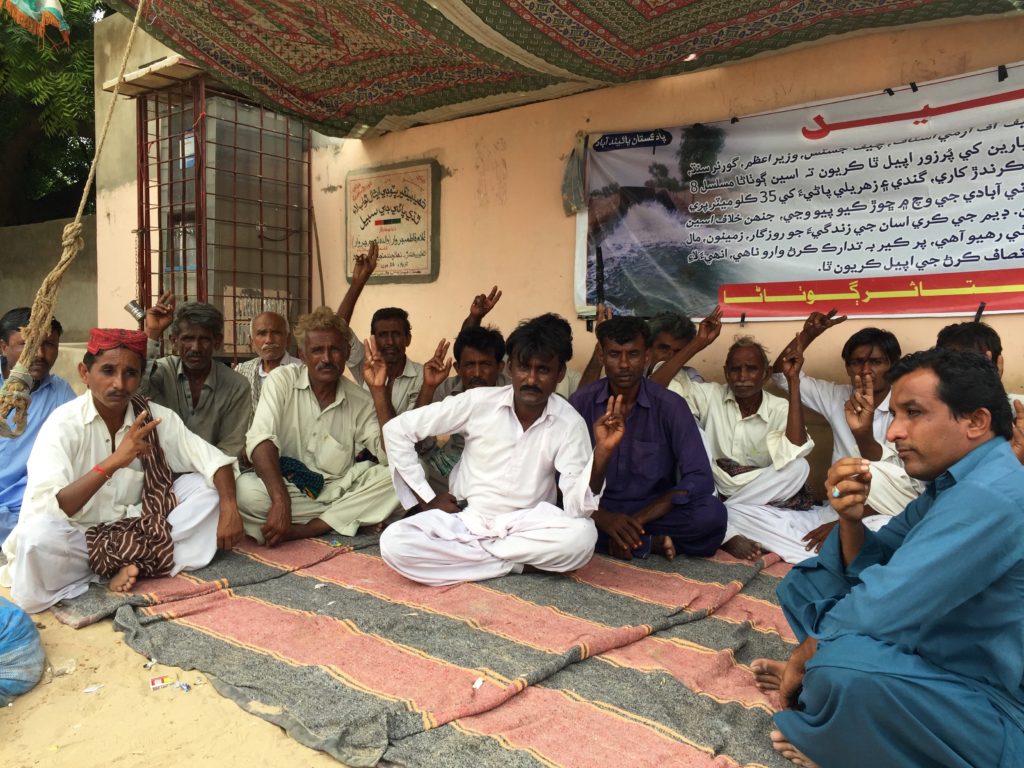 Since four villages lie within the trough at Gorano, SECMC is only utilising 1,400 acres of the depression, where there are no settlements, explains Rizvi. Bheem Raj, however, points out that the real reason why the storage area has been reduced is that the lands of local waderas Syed Ahmed Shah and Bhooral Shah of Kattan village fall within the other portion. “Both these waderas support local PPP MPAs and MNAs, and so they were accommodated and compensated,” says Raj. According to him, settlements, such as Nandhi Dhani hamlet, which also lie in the depression, were not compensated for because they do not belong to a wadera or a politically connected person. Their residents are members of the Kohli, Bheel and Meghwar communities. “If we revealed this fact in our protest campaign, we would be even more isolated because those at the decision-making level in the Sindh government are far less accommodating of scheduled castes,” he laments.

According to Rizvi, only those who own the land will be compensated. The protestors, he says, do not own land at Gorano. They have had unofficial custody of what is, in fact, government property. Locals of Gorano see things differently. They believe that the Kohlis’ ownership of this land pre-dates Partition. It is they who are the indigenous populace of the area. Sitting with protestors outside Islamkot Press Club, Lakshman Meghwar says his family has farmed and lived on the land in Gorano for generations. Being told all of a sudden that the land is not, and never was theirs, is news that is hard to comprehend. Raj points out that even if this is common grazing land belonging to the government, Gorano locals have for generations been paying dhal (tax) while cultivating it. Land policy in Tharparkar remains murky, despite the formulation of four land grant policies. Ghazi Bajeer, a reporter for Awami Awaz, also present at the protest, says that it was local PPP MPA Dr Mahesh Kumar Malani who gave the nod for the disposal of water at Gorano. 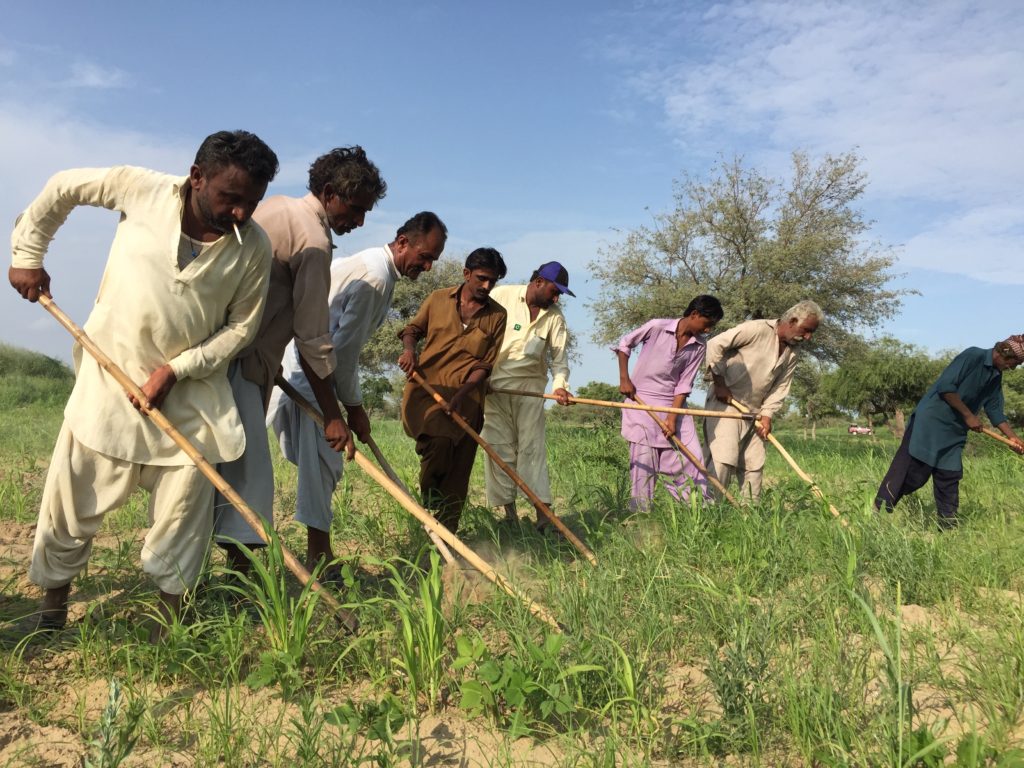 Of late, the protest movement has been sinking in quicksand. A January 2017 protest outside the Karachi Press Club was given little or no coverage by the English and Urdu media. In August 2017, the Sindh High Court ruled the disposal site to be environmentally and technically sound. “What everyone wants to know is why the social environment assessment report has not been made public,” says Ali Akbar Rahimoo, Executive Director at AWARE. Rahimoo cites the tragic Chotiari reservoir project that brought about the ruin of wetlands in the Nara area in Sanghar district, as an example of what can happen to an ecosystem if saline wastewater is dumped in it.

Rahimoo points out that SECMC officials have been unclear about how much water will be stored at Gorano. He says it has verbally been expressed that the maximum capacity of water would stand at 18 feet, but nothing has been provided in writing. The natural depression in Gorano enables minimal construction and in the two spots where embankments are required, they have been designed by EWA, along with engineering consultants EA Consulting and Berkley Associates.

Although SECMC will be depositing the water in an area of 1,400 acres, locals emphasise that this does not take into account the area that will be affected by the activity, which is closer to 4,000 acres. Standing on the eastern embankment of the storage area, Lakshman points to what looks like an elevated bund in the distance, but is, in fact, the portion of the pipeline that transports water to Dukkar Chho, the other dumping site. The construction of the pipeline has damaged land that could be used for farming and grazing.

Local villager Mayvo Meghwar sits under the shade of a kandi tree in a middle of a millet plantation and prepares a meal for fellow farmers who are removing grass off the field. He complains that the SECMC does not take into account cultural sensitivities. The construction of embankments required outsiders to make inroads into this community. As a result, the local women’s purdah was broken. 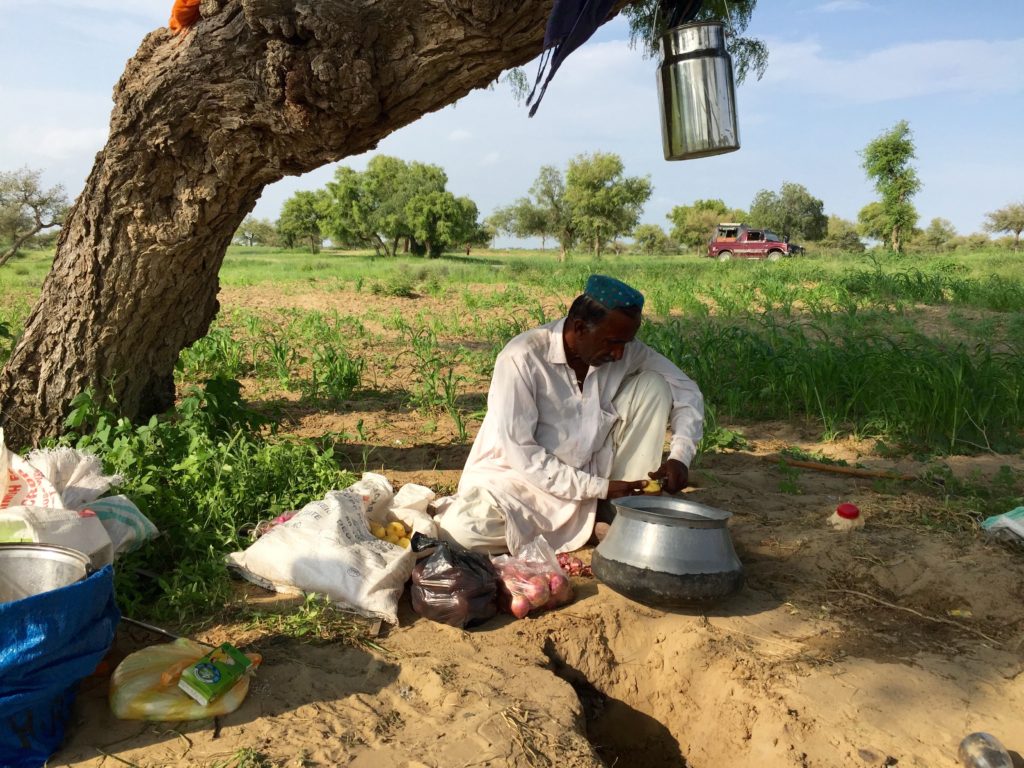 SECMC has stated on record that the saline wastewater stored here will not affect the underground water of the area. This is because there is a natural layer of limestone under the land. However, Rizvi admits that the project will impact those who farm in the area. According to Rahimoo, there is already evidence of seepage as the water level in one of the wells has risen. Dr Rasool Bux Mehar, head of the Environmental Engineering department at the Mehran University of Engineering and Technology, Jamshoro, and a professor at the US-Pakistan Centre for Advanced Studies in Water, explains that the soil’s fertility and the water table will be impacted. The potable water of wells in the area will turn brackish. Since the soil will no longer be suitable for cultivation, the locals will be dislocated.

Once the trough fills up, the water will eventually evaporate, while some of it will percolate into the soil, according to Rizvi.

Safaraz Rehman, a former CEO of Engro Foods, sheds some light on Engro’s approach to the joint venture. He says there is a strong culture of patriotism within Engro as a corporation. “People who have run it, such as Asad Umar, Zaffar Khan and Shaukat Mirza, happened to be patriots,” he explains. “They, in turn, hired patriots.” What drove Engro to look into coal extraction wasn’t a yearning for profit, but a patriotic desire to help Pakistan, he says. It saw mining as a way of creating job opportunities for the people. Engro won’t be making much money out of it, he says, because mining isn’t Engro’s line of business. This would partly explain why SECMC isn’t willing to build a water storage facility from scratch and is, instead, using a natural depression where minimum expenditure would be required.

“Shamsuddin Shaikh’s driving force as CEO of Engro Powergen and SECMC, was that the project would be for the betterment of Tharparkar,” Rehman continues. He points out that Engro has a strong CRS programme, which will undoubtedly make a difference in the lives of locals. The crux of the matter, Rehman explains, isn’t whether Engro will do the ‘right thing’ or not — it is the economic challenge posed by the project. As alternative energy becomes cheaper, slowly the world is turning away from fossil fuels. “The cost of repairing environmental degradation is expensive,” he says. 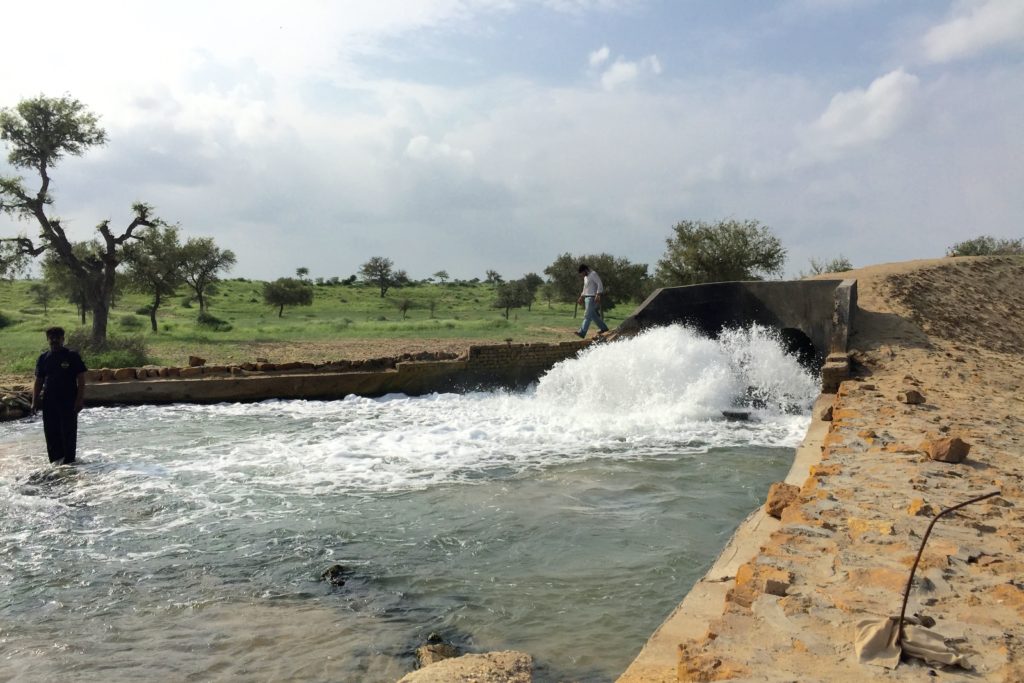 SECMC has developed a resettlement action plan whereby displaced locals of Block II will be moved to state-of-the-art model villages with modern facilities. But this is yet to be done. Dr Allah Nawaz Samoo, Chief Executive Officer of the Thardeep Rural Development Programme, says “showcasing something, and delivering it on the ground are two completely different things.” SECMC also plans to provide health facilities in the vicinity of Gorano, where free medical camps are currently being organised. Thirty-five Thari women are being trained to drive dumper trucks, on a salary. Schools have been set up in four villages in the district.

“Then why are the locals still protesting?” asks Samoo. Companies coming to Thar need to earn the locals’ trust, he says, and they can only do this through their actions. But, he contends, “The precedence in projects across the country shows that promises are rarely fulfilled.”