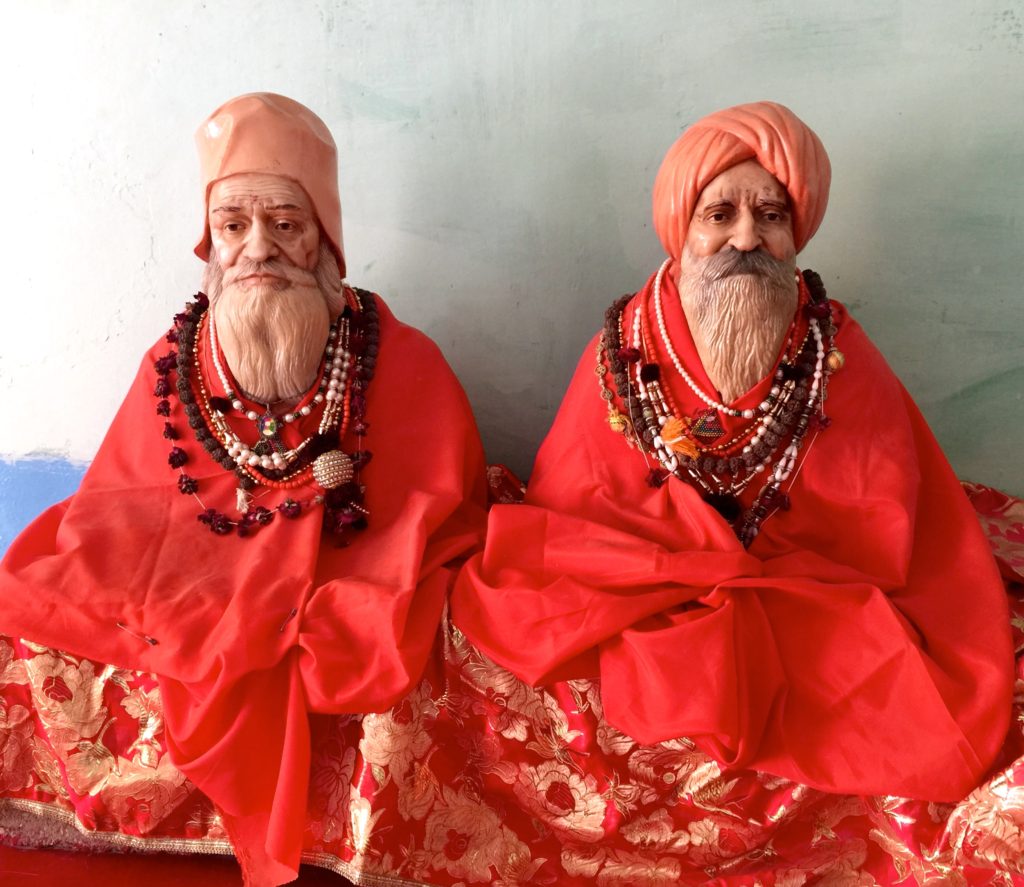 Inside a chamber at the shrine of Guru Mangal Giri Ashram, sits a congregation of dervishes and gods. These lifelike statues, it seems, have formed their own committee, to solve the plight of taluka Thano Bula Khan.

This remote plateau of Jamshoro District, in the western highlands of Sindh Kohistan, has more shrines than hospitals or schools.

“The government has done nothing for us,” complains Rasheeda Maachi, a resident of the town of Thano Bula Khan. Her thirsty toddler drinks muddy water out of a cement-mixing bowl, while Rasheeda herself is forced to beg for a living. Their closet-sized shanty, squeezed into half the width of a pedestrian lane, is the only roof above their heads. Pointing at the three-foot-high boundary wall that divides her compound from the other half of the lane, she says that the Deewans – local traders and businessmen – donated cement to the Khashkeli tribe, but not to the Maachis, the tribe to which she belongs.

While Rasheeda’s home has no electricity, her neighbour’s lights provide some visibility at night. Here, in the locality of Maachi Colony, electricity is supplied for five days and is cut off for another five. “There is no clean drinking water,” adds Waheed, her husband. Groundwater, accessed through boreholes, is brackish.

Ironically, Darwaat Dam, a rainwater storage facility, lies only 15 miles east. Waheed, a fisherman, commutes daily on a bike he shares with his relatives, to catch jarko fish, which he sells in the local bazaar. On a good day, he earns up to Rs 800, while other days he comes home empty-handed. 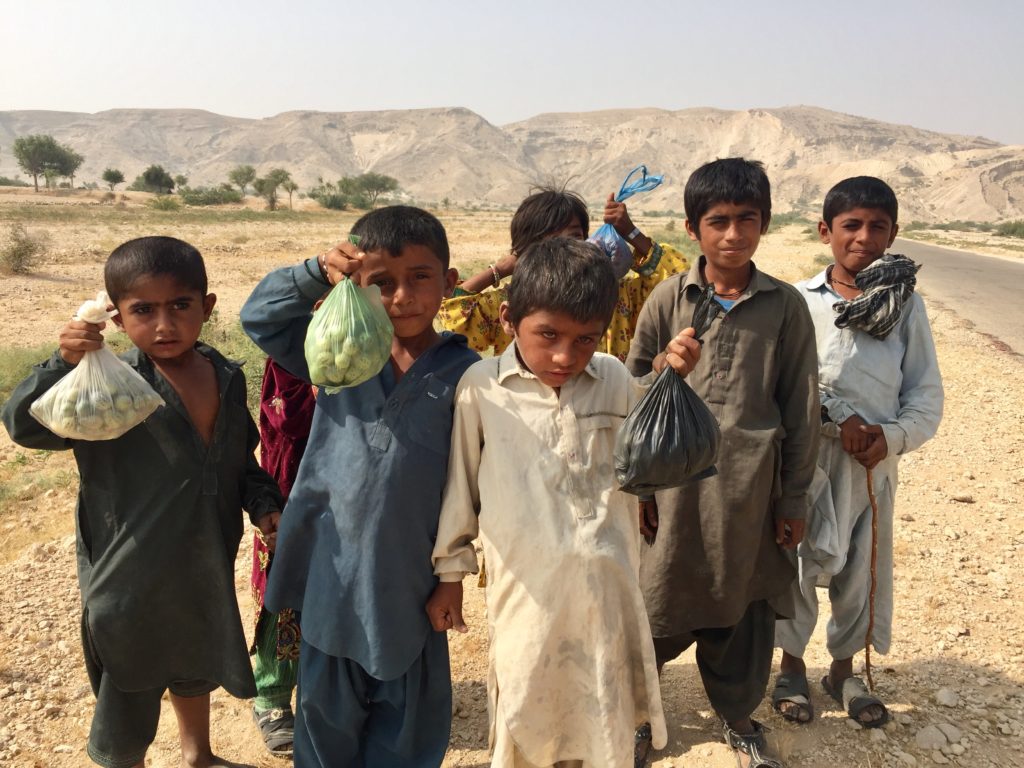 Miles beyond the town of Thano Bula Khan, a thin layer of yellow desert grass covers the plateau like a velvet carpet. A group of children stand by the roadside, selling bags of bayr, a local berry. Every time a car passes, they raise the bags and smile. If a car stops, they rush towards it in excitement. One of them, differently-abled, finds it hard to keep up with the rest. None of them attend school.

“There are only six functional high schools in the taluka,” says Shaikh Abdullah Kohistani, a local scholar and chairman of the NGO, Abbas Development Foundation. “The schools that do function are privately funded,” adds Kambo Khan Barahmani, a district council member.

With a population of 145,450 people, the taluka has only one hospital which “does not provide blood tests, X-rays, dialysis, or surgery and lacks lady doctors,” says Shaikh. There isn’t a single maternity home. Several women in remote areas such as Karchaat have died from complications during childbirth, discloses Haseen Khashkeli of the Al-Mehran Rural Development Organisation. 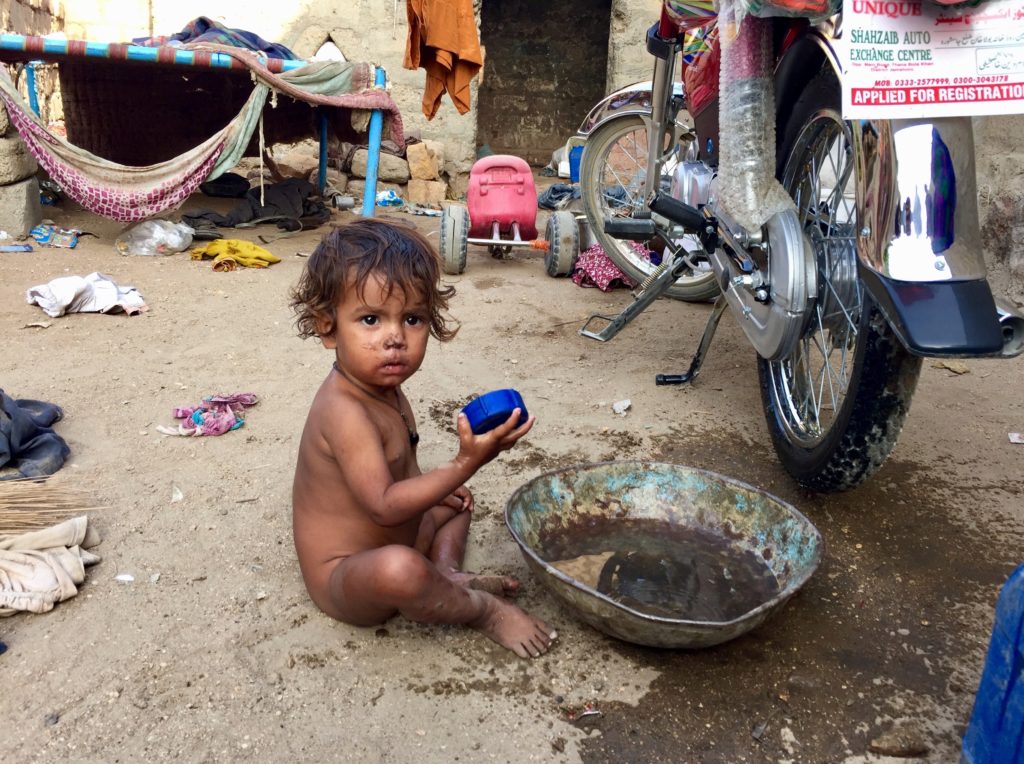 So the question arises, why has the scion of one family continued to win elections in this 1,801-square-kilometre taluka in Jamshoro district, on a PPP ticket since 1988, despite failing to provide his constituents with even the most basic amenities?

Malik Asad Sikandar also enjoys the support of the Punjabi, Pathan and Mohajir communities in neighbouring Kotri taluka, where he receives 80 per cent of the MQM vote. His father, Malik Sikandar Khan, was Thano Bula Khan’s elected representative from 1971 till 1977. Yet, their long reign notwithstanding, there is little, or no evidence of any development in the constituency.

Malik Asad justifies the sorry state of affairs by contending that it owes to circumstances beyond his control. For example, he told Newsline, those who qualify to be appointed as doctors and teachers on merit live outside the taluka and are unwilling to commute or relocate here. Locals, on the other hand, are under-qualified. “The only solution is to either appoint locals or raise salaries, giving outsiders an incentive to work in this area,” he says, “but neither of these options are applied.” According to Jalal Mehmood Shah, chief of the Sindh United Party, meanwhile, “teachers receive a generous salary package but do not attend school. They are Malik Asad’s supporters and he protects them; in return, they vote for him.” This, he says, is part and parcel of the corrupt system that enables Asad’s constant re-election.

Ramesh Kumar Gupta, a lawyer from Thano Bula Khan, contends that the absence of a formidable opposition lies at the root of Malik Asad’s lack of motivation to deliver. Asad takes victory for granted, he says. With the constituency in the palm of his hand, he does not feel the need to do more.

“Thano Bula Khan taluka has the lowest crime rate in the entire province,” says Asad – a fact acknowledged even by his opponents. But few believe that it is because of his administrative abilities. “It is partly due to the nature of the locals,” says Shaikh, “and partly because the population consists solely of indigenous tribes – Burfats (the majority), Khashkelis, Deewans and Lohanas. There are no outsiders in the taluka.”

But there is the rare occasion when one crosses paths with a migrant. 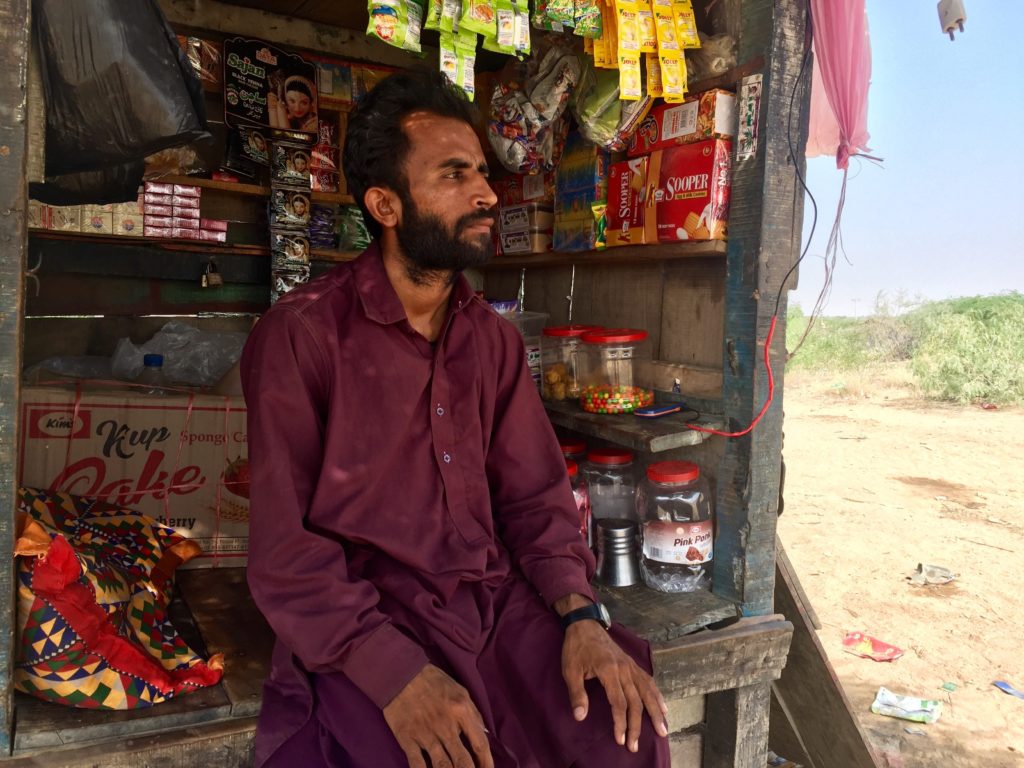 Several miles west of Thano Ahmad Khan, on the edge of Mahal Kohistan Wildlife Sanctuary, lies a tableland referred to as Daoo Jabal. Here one can spot Abdul Ghani Barijo’s solitary dhaba, which in Sindhi is known as a pirri, but which he proudly refers to as a “cabin.” Barijo moved to this desolate portion of the taluka from Matiari. He sells betel nut, biscuits, candy and dried lentils for visitors who pass through here, en route to the shrine of Shiri Guru Baal Puri Sudh Sawai, several miles west.

Women dressed in bright clothes and wearing red lipstick can be seen roaming the bazaar in the town of Thano Bula Khan. “There is no concept of purdah in our culture,” discloses Ramesh Kumar. Hindus – who form approximately 40 per cent of the population in the taluka – and Muslims live in communal harmony.

WAPDA’s controversial Darwaat Dam (‘Dar-waat’ is a blend of two Sindhi words and translates into ‘doormouth’), built on the incline of a hill torrent known as Nai Baran, covers 25,000 acres. “It was I who suggested the idea of Darwaat Dam to then president Asif Ali Zardari,” says Asad. Yet many, including Shaikh puzzle over the creation of a dam that does not seem to be providing water to the taluka. “While the dam is built on the edge of Thano Bula Khan taluka,” says Shaikh, “it only provides irrigation water to Thatta taluka.” It is suspected that the facility may be a precursor to a future housing project. 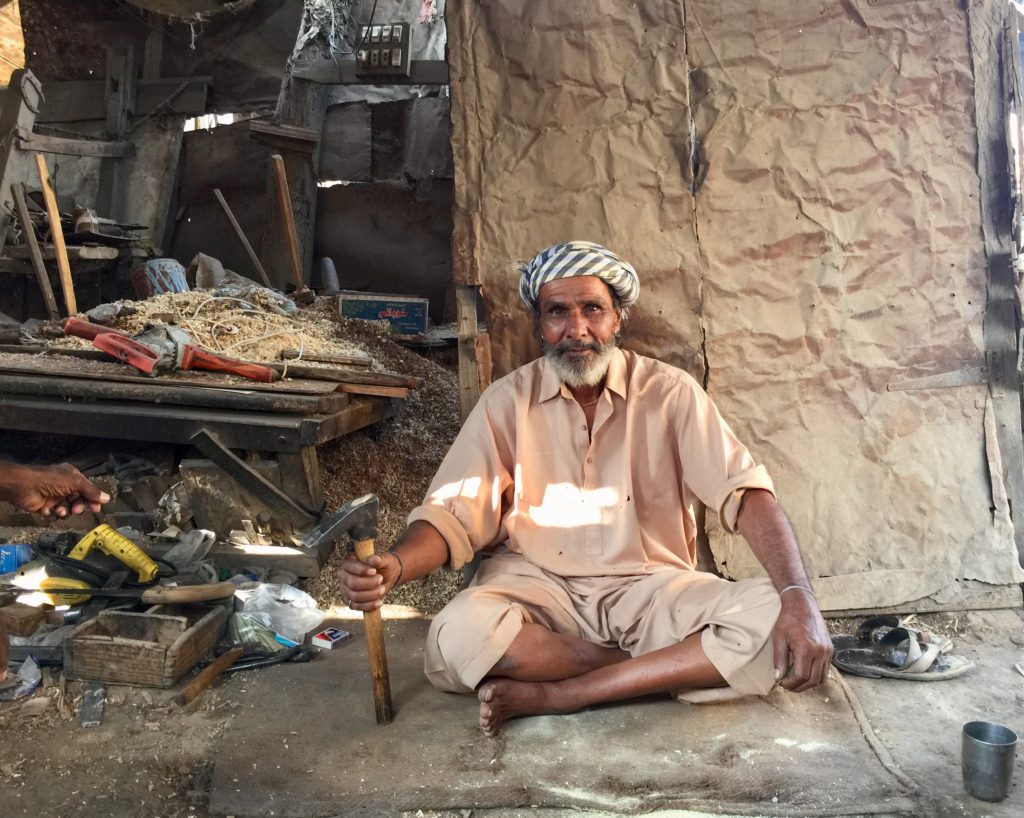 It is questionable decisions like this and petty politics that Malik Asad occupies himself with – what is referred to in Sindh as ‘waderki siasat’ (feudal politics). Surrounded by the Khirthar Mountains on one side, and the Lakki Hills on the other, the taluka, which, according to Jalal Mehmood Shah is “the most mineral-rich region in Sindh,” is a Machiavellian wilderness of dynastic and political intrigue.

The streets of Malik Asad’s ancestral village, Thano Ahmad Khan, are lined not with litter, but fallen leaves. Cleaner and better organised than most rural settlements in Sindh, it is devoid of congestion and overpopulation. This orderliness may be attributed to the Deewans, whom Asad carries in his pocket, and who manage his agricultural and business enterprises.

Members of the Malik family may be neighbours in Thano Ahmad Khan, but there is no love lost between them. For the little opposition that does exist in the taluka, is partly from Asad’s own cousins, Malik Changez and Malik Alauddin.

When Asad and Zardari developed differences a few months ago over Bahria Town’s purchase of land in taluka Thano Bula Khan, opponents hoped to cash in on the opportunity, by joining the PPP. “But the two patched up,” says Jalal Mehmood Shah, “after Malik Asad paid Zardari vast sums of money, which was half of the share in the sale of land.” During the fallout, Zardari had carried out a reshuffle in the police administration of the taluka as a way to pressure Asad. But now, explains Shah, he has reinstated the previous police officers – Asad’s men.

The hamlet of Thano Arab Khan lies within Mahal Kohistan Wildlife Sanctuary, and is home to Wadero Saleh Mohommad Barahmani, one of the area’s larger onion cultivators. Surrounded by a thick cover of neem and keekar trees, the settlement is an oasis in a vast ornamental desert of evenly-spaced kandi trees. The village gets its share of unexpected visitors. Barahmani recalls the time a prowling Indian wolf attacked his cattle one moonlit night a few months ago.

The wadero’s onion plantation, which surrounds his home, is watered by tubewells and earns him Rs. 500,000 per acre.

A long-time Asad supporter, Barahmani has of late grown disillusioned with the man. He laments that Asad has never addressed the needs of his raj. The taluka’s 100-kilometre-long metalled road runs out miles before reaching Thano Arab Khan, where “there is no electricity for 12 hours a day,” he complains. The only medical facility is one highly inadequate basic healthcare unit.

He adds, “Over 15 settlements were displaced and drowned during the creation of Darwaat Dam. The dislocated families did not get any compensation whatsoever.”

Barahmani, too, was keen on making inroads into the PPP when Asad briefly fell out of favour with the Zardaris. But there are murmurs among his courtiers that he is, at the same time, trying privately to patch up with Asad. Waderki siasat!

Perceived threats to Asad’s authority are dealt with ruthlessly. These are posed by individuals who have no intention of challenging him, but merely attempt to help the local community, and gain popularity by doing so.

One such example of that is Mohan Lal Kohistani, a former PPP MPA who did a lot of work for the poor in the taluka and provided them with jobs. According to Shaikh – who has personally suffered Asad’s wrath – the Maliks drove Mohan Lal into exile after levelling false charges against him. Malik Asad, however, denies any involvement in Mohan Lal’s moving to London. “Why would I level charges against a fellow party worker?” he retorts.

“There were three things my father advised me never to be afraid of,” recalls Shaikh. “The wadero, the djinn and the dog; because these three creatures feed off your fear.”

The Maliks were not always the kings of Kohistan. Up until the 1980s, Pir Ghulam Rasool Shah Jilani commanded great respect and influence in the region. After Malik Sikander’s death, Jilani benevolently proclaimed Malik Asad the sardar, so as to avoid a scuffle within their family for the title. But from that point onwards, Jilani’s luck dwindled while Asad went from strength to strength. In the 1988 general election, a defiant Asad contested against Jilani’s cousin, Pir Zaman Shah, and defeated him. And since then he has remained king of his realm.